(or do both & never miss anything)

What’s in the box:

About the Yocan Falcon Vaporizer

This device was intended for aromatherapy use only.

The Yocan Falcon Vaporizer is outfitted with a 1000mAh that’s perfect for a device like the Yocan Falcon Vaporizer that’s built to be an on-the-go unit. With a battery that’s widely compatible with different heating elements, having one with a beefy capacity is somewhat of a must. The quartz tri coils and the pancake coils can be demanding atomizers when it comes to power. Nevertheless, having more than enough juice to last you significant sessions in between charges is important. That's why the folks at Yocan gave emphasis to longevity and overall superiority when it comes to heating and extracting the active ingredients from both wax concentrates and select botanical dry herb strains. So, whatever the demand is in vaping, the Yocan Falcon Vaporizer has definitely got you covered. The battery is even great for quick group sessions as it can withstand several cycles you you and your friends are in for partaking.

The Yocan Falcon Vaporizer can be used with the quartz tri coil for a relatively familiar experience but with a twist. You get the same powerful performance as you would with a traditional dab pen but you also get the benefits of having the vapors filtered and moisturized using the glass attachment that can accommodate water.

If you’ve been consuming weed, you’d know that it hits hard but it comes with a certain harshness. Using the Yocan Falcon Vaporizer this way lets you still reap the benefits of consuming herbs but lets you eliminate the harshness of consuming ground botanical plant matter. This way you can still enjoy your daily rituals but you no longer have to cough your lungs out in the process.

If you think the Yocan Falcon Vaporizer’s ability to customize and personalize your sessions ends there, you’ll be surprised to know that this device also comes with variable voltage settings. This means that you can easily alter the level of voltage the battery uses to heat your preferred materials. However, it’s mainly used as temperature directly affects the quality of vapor the Yocan Falcon Vaporizer produces.

Note: The power button is the squarish button located right below the Falcon logo.

Loading the Yocan Falcon Vaporizer as a wax vaporizer:

Loading the Yocan Falcon Vaporizer as a dry herb vaporizer:

Vaping with the Yocan Falcon Vaporizer:

Care and Maintenance of the Yocan Falcon Vaporizer:

Buy with confidence. We offer free returns on all orders. If for any reason, you would like to return your item, please contact us within 30 days of your order date and we will send you a prepaid label to ship the item back to us for a refund.

Let customers speak for us

This is my second riddles pipe , the previous pipe finally cracked at the bottom of the bowl , it did last about 3000 bowls smoked . Which to me that is exceptional.

It’s really beautiful and a lot bigger than I expected! It hit really great and the shipping was quick and it was packaged very well. 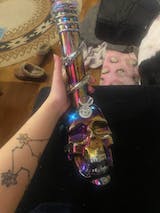 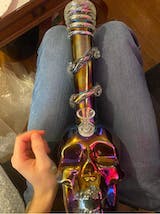 Received the Afghan Hemp as a gift. I was so glad to receive, I’m hooked now. Love this product..

Hits hard for its size. Pair with filter mouthpiece for smoothest and flavor filled hits. In summary, it won’t disappoint and if it does you will be to high to notice.